--
THIS PHONE NUMBER SAYS IT HAS BEEN DISCONNECTED OR NO LONGER IN SERVICE. I HAVE TRIED IT SINCE 3-... 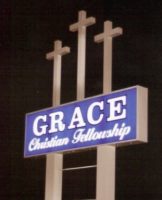 ADA BAPTIST TEMPLE is located at 301 NAPIER STREET in the city of Ada. Ada is located in the beautiful state of Oklahoma. According to our database, there are approximately 94 churches in Ada, with 2 Catholic churches, 33 Baptist churches, 4 Pentecostal churches, 4 Methodist churches, and 51 other denomination churches. If you are looking for a new church or just visiting Ada, please browse through our church directory to find a church that meets your needs.

The Baptist denomination is the largest free church denomination in the world with over forty-three members around the world. However, nearly thirty-three million Baptists live in America. The origins of Baptist churches can be traced back to John Smyth and the Separatist Movement in 1608 that began in England. Something that makes the Baptist church's beliefs unique is that they believe in the baptism of adult believers instead of infant baptism. Baptist denominations follow a congregational church governance in which each individual congregation is governed autonomously. Thanks for using ChurchAngel.com - the ultimate church finder!