St. James Cathedral is a vibrant and historic Episcopal church in heart of downtown Chicago, welcoming you as you are, without conditions or expectations. We look forward to meeting you when you visit our church.

The congregation draws members from our downtown neighborhood, across the city, and from the Chicago suburbs. Our diversity also extends to our worship, which balances traditional liturgy with progressive, theologically-grounded preaching which fully embraces all people into the body of Christ, regardless of age, ethnicity, expression, orientation, or background.

The Very Rev. Dominic Barrington was installed as Dean of St. James Cathedral in September 2015, after twenty years of ordained ministry in the Church of England, during which he served in the dioceses of Peterborough, Durham and Southwark. During his theological training, he spent a year as an exchange student at the Church Divinity School of the Pacific, the Episcopal seminary on the Pacific Rim in Berkeley, California, from which sprung a deep-seated affection for The Episcopal Church.

â€œIn Dominic Barrington, St. James Cathedral has called a strong, loving, and wise priest to be its dean,â€ Bishop Jeffrey Lee said when Barringtonâ€™s appointment was announced in March 2015. â€œI believe he will be an inspirational leader at the cathedral, and a strong presence in the city of Chicago, championing the mission and ministry of the cathedral as a place of extraordinary hospitality, significant outreach, and excellence in the arts.â€

Dominic is well known in both England and the United States for his knowledge and experience of the Holy Land, where he has led over forty pilgrimages in the last twenty years, structured to provide income and employment for the indigenous Christian communities of Palestine and Israel.

Before entering seminary, Dominic spent five years with Arts Council England working to create and fund new performance opportunities for the London Symphony, the Royal Philharmonic, and other orchestras. He also worked for several years with some of Britainâ€™s leading professional choirs and vocal groups, including The Sixteen and the Hilliard Ensemble.

Dominic is married to Dr. Alison Barrington, a music therapist of more than twenty years standing, who has worked in both clinical and academic contexts, and they have two young sons â€” Benedict and Linus.

Come be encouraged, uplifted and inspired every Wednesday night at 7p & Sunday night at 2p a... 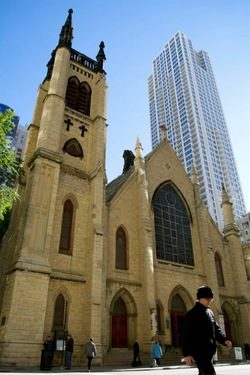 St. James Cathedral, Chicago is located at 65 E. Huron St. in the city of Chicago. Chicago is located in the beautiful state of Illinois. According to our database, there are approximately 1,914 churches in Chicago, with 252 Catholic churches, 351 Baptist churches, 36 Pentecostal churches, 72 Methodist churches, and 1,203 other denomination churches. If you are looking for a new church or just visiting Chicago, please browse through our church directory to find a church that meets your needs.

Episcopal churches have a rich history, coming from th Church of England when merchants and other travelers first shared the Christian message in England. Now, Episcopal parishes and congregations can be found throughout the globe, as one of the largest denominations in the world. The Episcopal Church is part of the worldwide Anglican Communion and believe in the Father, Son and Holy Spirit. The Episcopal church is often described as "Protestant, yet Catholic". Feel free to browse our directory to find a Christian church near you.